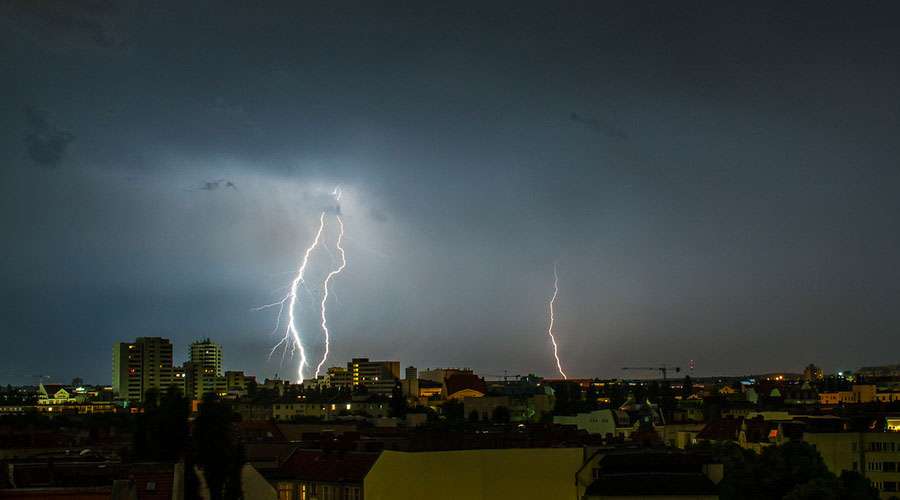 The Mesa Fire and Medical Department offers the following safety tips to help Valley residents prepare for the various weather events that make up the monsoon:

Thunderstorms and lightning: If you can hear thunder, then you are close enough to be struck by lightning.
Take shelter in a sturdy building or a hard-topped vehicle. You should remain in this shelter 30 minutes after hearing the last rumble of thunder.

High Winds: Arizona thunderstorm winds often exceed 40 mph and straight-line winds can exceed 100 mph.
Move into a central interior room away from windows to avoid blowing debris that could shatter glass.
If you are driving in high winds, slow down and anticipate steering correction when moving from protected to unprotected wind areas or when encountering large passing vehicles.

Be aware of high-profile vehicles — trucks, semis, buses, campers, or those towing a trailer — because they can be unpredictable during high winds.

Before the monsoon storm hits, evaluate large trees close to your home for potential hazards.

Dust storms: If you are caught in a dust storm while driving, pull off the roadway as far as safely possible. Turn off headlights and taillights, put the vehicle in park, and take your foot off the brake.

With reduced visibility, other drivers behind you could see the brake lights and assume you are driving on the road and follow your lights.

Floods: Monsoon lighting over the Valley with Piestewa Peak in the distance. This is 45 minutes of video condensed into 58 seconds. Video by Rob Schumacher

Monsoon: Whether we like it or not, it’s almost here. For the next three months, we’ll be treated to dazzling displays of lightning, powerful winds that will rip off roofs and uproot trees, and pounding rain that will flood washes and sweep away cars.

What is the monsoon?

According to the National Weather Service, the word “monsoon” is derived from the Arabic word “mausim,” which means season. So, as opposed to an individual storm, the monsoon is a specific season of the year.

Here in Arizona, the monsoon is essentially a change in the weather pattern. We have winds that typically blow in from the west and southwest, keeping the state fairly dry. Around this time of year, however, the wind flow shifts.

It starts to blow in from the east and southeast, dragging an unusual amount of moisture from the Gulf of Mexico into Arizona on its way up to the Four Corners.

When Arizona’s heat and overall unstable weather mixes with the moisture brought in by these winds, storms arise.

Will this monsoon be any different?

With the early heat wave Arizona has experienced this year, many may be wondering if the heat will have any impact on how the monsoon will play out.

Carl Cerniglia, a meteorologist with the National Weather Service in Tucson, shed some light on the subject, saying that, while we can expect a warmer summer than usual, the heat should not affect the monsoon much.

“If anything, there’s a slight chance (the monsoon) could be slower as an aftereffect of El Niño,” Cerniglia said.

What are the records?

While Cerniglia said we can expect some rain on Thursday and Friday, he said it should be dry for the rest of the month.

“June is typically a pretty dry month, but a lot of times when we’re in La Niña situations, we can have a hefty monsoon season,” he said. “This year, we have El Niño disappearing and La Niña starting to form in the fall, so there’s no strong influence one way or another. It should be a pretty typical monsoon season.”

According to the Weather Service, La Niña is a term for the cooling of tropical waters from south of Hawaii to about the coast of South America. El Niño is the opposite, bringing warmer temperatures to that region.

The Weather Service said the terms originated in Peru when Peruvian fishermen noticed that the waters were really warm right around Christmas. They called it El Niño, which means “the Christ Child,” or “the Little Boy,” and the opposing weather phenomenon took on the name La Niña, meaning “the Little Girl.”

How have people been affected in the past?

How can you prepare?

We can’t do anything to prevent the monsoon, but we can be prepared.

Free sandbags are available for pickup at many fire stations throughout the Valley. Some provide bags and shovels for use, but others require residents to bring their own shovels and bags. You can call your local fire department or check their website to see what you will need to bring to get sandbags for your home.

The Mesa Fire and Medical Department offers the following safety tips to help Valley residents prepare for the various weather events that make up the monsoon:

According to the National Weather Service, nearly half of all flood fatalities are vehicle related. Never drive into a flooded roadway: It is extremely difficult to estimate the depth of running water or the strength of a current.
Never drive around barricades. They are there for a reason, usually because flooding is anticipated or has already happened. In addition, the road could be damaged and unsafe for drivers.
It only takes 1 to 2 feet of water to float most vehicles, including SUVs.
Never allow children to play near washes or storm drains after any rainfall. They can be swept away.
Downed power lines

If your home or business has been damaged due to water damage from monsoons in Phoenix, Call ASAP Restoration today!